Ohio is a microcosm of what’s happening in the USA today. And as such the State is known as “The Heart Of It All” and for Presidential elections, a “Swing State.” Discover why Ohio may be an answer to what was Romney’s Five Point Plan and what could fuel our nation. 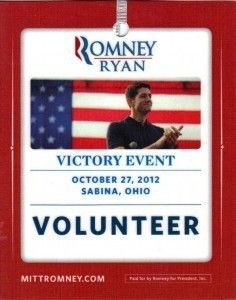 I was called upon to volunteer for a Romney Ryan Victory Event in Clinton County, Ohio – My local area.  Vice Presidential Candidate, Paul Ryan, bussed in to address rural Ohioans at the East Clinton High School gym in Sabina, Ohio.

Knock Your Knickers Off

The location of this event was in the middle of nowhere.  Really.  I’m fairly certain un-herded cows have peered in the school windows, and the rebellious student or two has escaped into the corn fields.

So it was completely amazing to me that a group of people from Alabama showed up at the rally to sit in this local high school gym.  Surely, there was closer entertainment.

Why were they there, you ask?

To knock on doors and spread the message.

Fact: Where the states are less purple, it makes sense to send troops up to where the going the going gets tough.  To “The Heart Of It All” — The “Swing State” everybody’s usually talking about.

Want to be even more amazed?

My main job was to hang out near the secret service “screening” stations to greet Romney-Ryan fans and escort the press to their designated area so they could cover the event.

Local media went to one side with long school tables and reserved seating.

Traveling media went to the other side.  Where the tables had cloths and the space more grandeur.  (I gotta figure out how to land one of these jobs, because the buffet looked delicious hiding behind the TV cameras!) 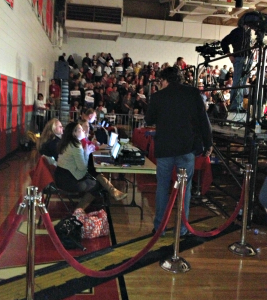 Both President George W. Bush and Vice President Cheney campaigned here in 2004.  Our airport hosts the largest jet plane in the world, of course Air Force One would take a swoop in here, eh?

Clinton County, Ohio has been chosen as a meeting place by elected and government officials since 2008 when DHL pulled their American headquarters out of Wilmington, the county seat.  About 10,000 jobs were eliminated, permanently changing the region’s economic landscape.

We had been dubbed the poster child of jobless communities by major news networks and high-profile celebrities.

Round Tables about jobs?

Ohhhhh — This wasn’t about the Wilmington Air Park and the brave locals still looking for jobs?

Nope!   Ryan chose to hit Obama on the Auto Bailout instead.

Before the Victory Rally, our Vice Presidential hopeful met with a group of non-union salaried workers from Delphi, a company up the road near Dayton, Ohio.

So, a strategic move for the region…?

Congressman Ryan moved the crowd.  He reminded us of his passionate allegiance to Wisconsin, and recalled his strong Ohio roots as a graduate of Miami University in Oxford, Ohio.  He spoke of one-factory towns, and the pains he knew Americans are feeling.  He discussed re-training Americans for work that will need to be done.

Mr. Ryan also affirmed the commitment he and Mitt Romney have for empowering our small business owners to spur the creation of jobs.  His words rang for true American values, like those held in rural America. 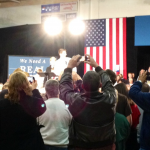 Perhaps the statement that most caught my ear went something like this:

95% of the world’s consumers live outside the United States.  We need to be manufacturing goods and growing food to export and sell to those consumers.  This puts people back to work and our economy back on the right road.

Did he say food?

He was in the right place — Because we have cows, soy beans, and corn to rock the socks off of our global neighbors!  Plus, our little enclave of Ohio is a a hub of transportation options to get these delicious delights pretty much anywhere they need to go.

An order of burgers, edemame, and corn on the cob for China?  Comin’ right up!

The Will Of The People

Do these messages really match what the people want?  I have a diverse social circle online, so a crowdsourced answer would be an interesting exploration.  Note: I had previously noticed that many of my online friends expressed their preference for views other than my own.

I asked them this question, and offered to quote them:

“USA Friends, what *1 thing* is most important for you in your President this election?” 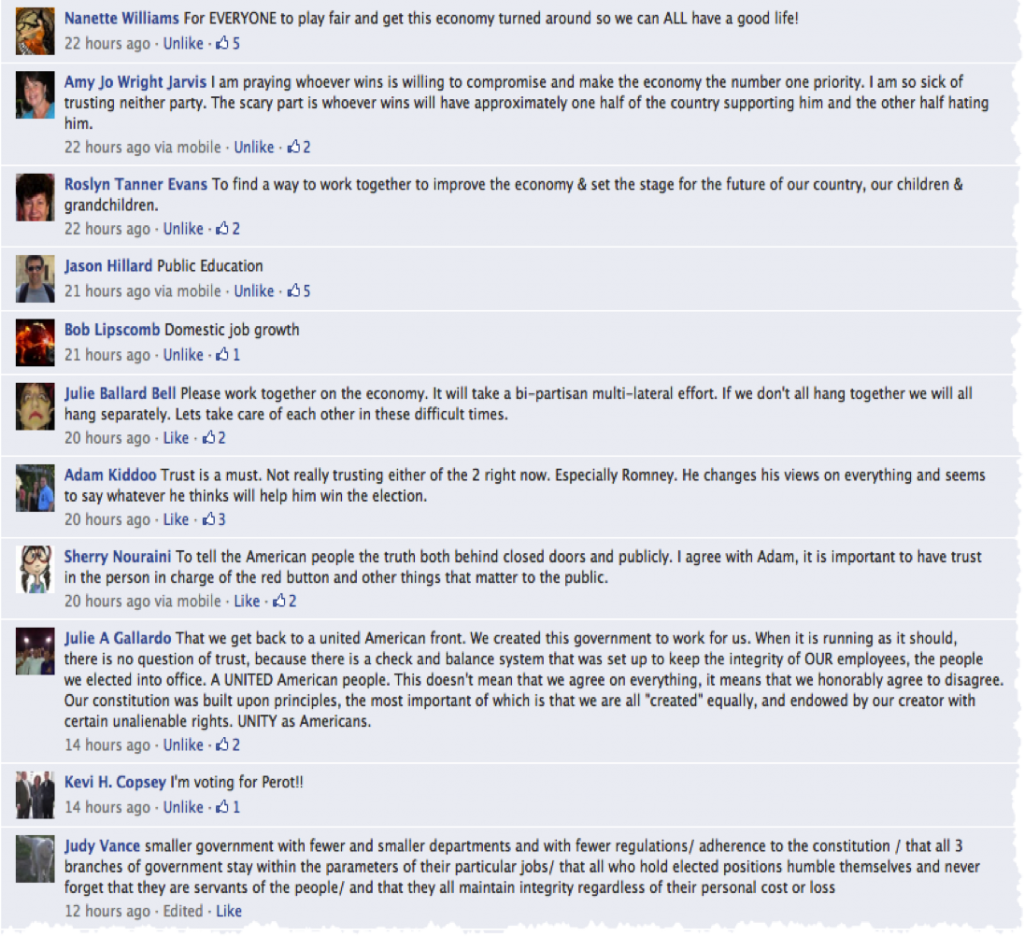 Much of what Paul Ryan discussed spoke to the comments above.

I decided to take it to my business Facebook Page, and asked the very same question of small business owners and entrepreneurs: 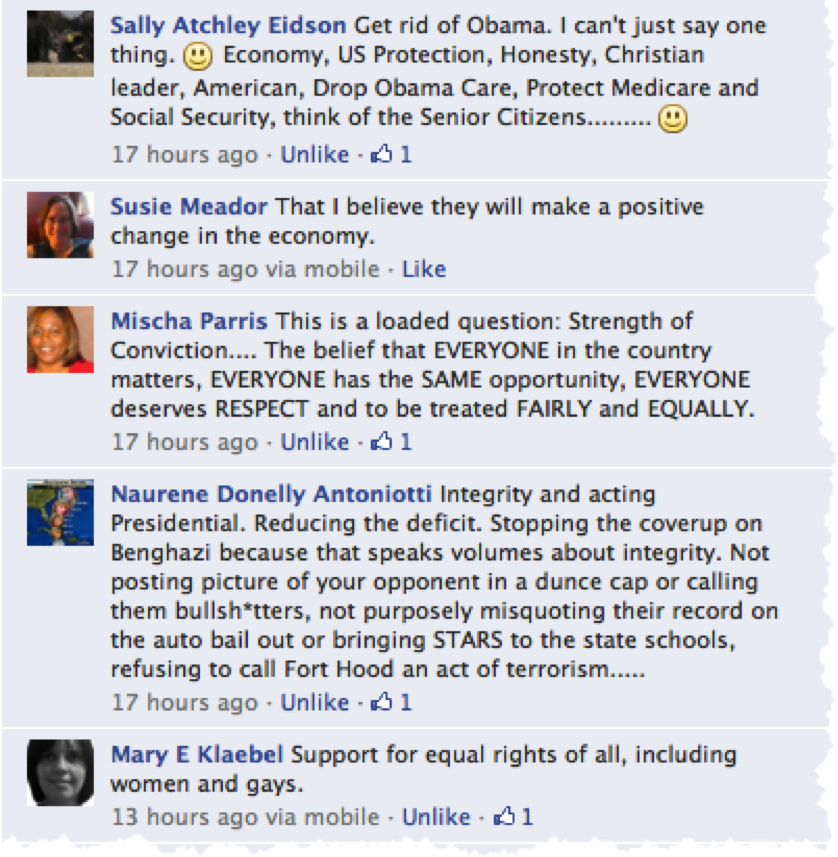 Surprisingly, the answers here were more passionate and even controversial.

The people that answered my queries above had no idea what I heard specifically from Mr. Ryan before they responded.  I had only told them that I attended the Victory Event.  All that shared their thoughts, I have some familiarity.  So, all answers are genuine and real – I have no reason to believe otherwise.

What You Know As Romney’s 5 Point Plan

Ryan’s words were consistent with this.

Lets tour some numbers and see what shakes out…

Americans out of work = 23 million.

About $211 bill could be kept in the United States by becoming oil-independent.

12 million jobs could be created by fulfilling needs for global consumers – 95% outside the US.

How many more jobs would Romney & Ryan’s 12 million be catalyst to?

Is Ohio at the heart of fostering a robust food economy?

Could Ohio be the heart of what fuels the globe for our future?

Please tell me your thoughts in the comments box below! 🙂