If you’re a blogger, you already know the answer to this question: How has journalism changed with technology?

The Internet and technology have definitely changed the way journalists report news.  The impact of technology on journalism has been huge!

So, why shouldn’t they be included in White House briefings?

The White House is changing journalism by allowing four Skype seats in the White House briefing room for journalists “outside the beltway” – Fifty miles or more, outside of Washington, D.C.

Truthfully, I’ve already heard “Debbie Downers” grumbling about this move as negative.  However, there absolutely is a “glass-half-full” point of view to explore here.

5 Ways The White House Is Changing Journalism By Using Technology

This development is bound to spark good things!  Lets talk about how the White House is changing journalism with Skype and what some of the benefits might be…

Brings The White House Into Now

There isn’t an industry or institution that hasn’t evolved and implemented new technologies.  Some examples:

We use technology for shopping online, and branches of government have adopted technology.

So why not the White House?

Even newspapers and mainstream media have flexed with trends changing journalism.  It is possible to keep core traditions in the White House briefing room while embracing available technologies.

This goes two ways: Increased channels both from and to the White House.

The American public – and the world – would see more diversified reporting, giving the public more avenues to access White House news.  In turn, the White House and the Press Secretary have a more diverse set of reporters sharing their headlines.

Stronger Connection With ‘We The People’

By adding Skype seats and increasing the number of reporters in the White House briefing room, the Press Secretary has increased connections with the American public.

Prior to 2017, White House press corp journalists were primarily connected with the East Coast news bureaus and those metropolitan areas.  The new Skype seats bring representation for the nation’s heartland, a population felt largely unheard by previous administrations.

Accepting a larger, more diverse set of journalists brings a broader range of questions for the Press Secretary.  In addition, different areas of the country will find different topics important.  So, we could expect a more varied set of questions and topics to be questioned.

This only tests administrations and actually holds them more accountable to reporters, and the American public. 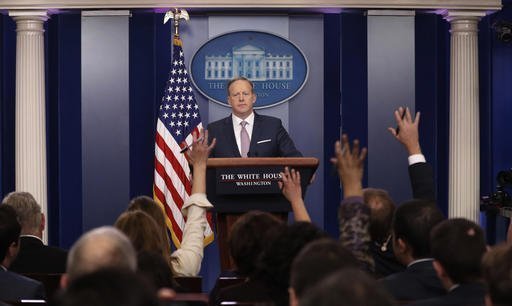 ‘We The People’ could then expect better news reporting from the White House press corp and more reliable news from our media sources regarding the White House and our government as a whole.

While we’re changing journalism, may we hope for even more evolution?

Should adding four seats go well, it would seem reasonable that more seats might be added in the future.  Perhaps twelve seats?

Yes, when we’re given an inch, we take a mile.  However, with the reasoning above, this should prove worthwhile, right?  🙂

Summing it up, technology has drastically changed the news business.  The White House is the highest office in the land, and the White House briefing room is keeping up with changes in journalism today.

If we are on social media, we must all think like publishers.  If you are a blogger, technically, you’re a journalist.  And technology will only continue changing journalism.

I, for one, hope to gain access to one of those Skype seats – Even if only for a day – Under this, or even a future President.  I would consider it an honor.  It appears others would too.

Critics, muffle your grumbling!  Those working in online publishing should all celebrate this evolution for the opportunity it really is.