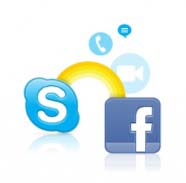 Were you ooohhing and aaaahhing over the coming of Facebook Video Calling?

Did you reel right in to chit chat with your friends via Facebook’s new Skype video chat feature?

Recent new media headlines are all about Facebook Video Calling and Google+.

It seems super-users can’t get enough of these topics – they’re all over Twitter!  I suppose fairly so, as we hear more and more that Google is taking a swing at competing with Facebook.

Really, there was no rise in my enthusiasm for this video feature to arrive at Facebook.  I was happy to comment and private message on Facebook, and email and Skype with folks as I had been.  Using live video has not been a huge fascination for me, as I feel that other mediums better feature my assets.

But the evolution of new media is toward video.  It is utilized and shared more often each day.

Plus…it is quicker than typing.

So, I dare to push my envelope.

Considering Facebook’s attempt to link private messaging, text messaging, and email on their network, it makes sense that integrating video would be next in order to complete a portfolio of communication options right in the social platform.

So, news of this got every social media enthusiast excited!  W00t!!

Mashable covered the Facebook announcement – the arrival of Skype-powered video chat – and also provided instructions on how to set it up.

It is probably relevant to convey that before trying the Facebook video chat powered by Skype, I had used Facebook with expert proficiency and “Skyped” a handful of times.

As a social media professional, naturally, I wanted to know about, and experience, THE BIG DEAL.

It was my privilege to team up with another social media professional that I had met through Pages Gone Wild.

Dorien Morin-van Dam, from More In Media, was a willing and energetic collaborator.  We set our time to give this new Facebook video calling a whirl!

Pre-experiment, Dorien had researched what some others had said of their experiences.  I watched Twitter and thought I would just jump in and formulate my own opinion.  Each of us made a few preliminary checks to our computer system to be ready; prepare.

I wish I could say that all was smooth sailin’.  But it wasn’t.

Dorien and I tried to initiate through the Facebook system, which we knew would involve downloading the Skype-powered Facebook Video Chat program.

She called me.  Called me again.  And a third time.  We couldn’t manage to connect all the way through.

I know I tried initiating connection with her at least once.  She had already downloaded the program, so I needed to do this prompted by her initial contact.

We hopped over to Skype itself to see if it was necessary to begin from there.  First, I could see her, but she could not see me.  We got out of Skype to see if we could manage something originating exclusively from Facebook.  We could not get it to work.

We decided that I would investigate the video package on my computer.  Dorien was working with her family to see what might be any potential disconnect on her end.  While I worked with the video components, I also went through my software and the program to see if I had done something in correctly.

Dorien and I managed to connect again via Skype.  Tried Facebook initiation again.  And we also got my family involved in helping me cancel out any problems with my computer or processes. 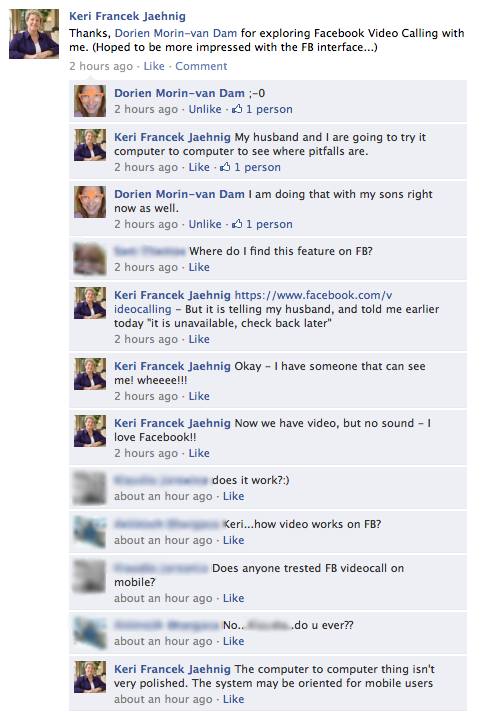 It is important to note that we could not connect video both ways from Facebook Video Chat at any time within my household.  If we got 2-way video, we did not have sound.  Oh — the sound-voice components wouldn’t connect, but the Facebook graphic enhancements of various types WOULD work.  Lightening striking stuck on the screen the longest.  I’m sure that is groovy to some.

I don’t even want to know what has to happen for the Group Chat option!!

In the midst of this, I did make a comment on my Facebook profile.  Others were curious too.  They could not navigate their way to success either, it seemed.

In the end, I downloaded and re-downloaded the Skype-powered Facebook Video Calling program 4 times.  If I’m correct, on Dorien’s end, they downloaded 10 times!  I managed to figure out that there was nothing wrong with my computer, or my processes, and that Facebook was experiencing issues and the video calling was “down.”

Confused by all that?  I was.  With all that effort, the video chat never did work appropriately.

Dorien offers some great insight, and more screenshots of our communication here.

We were able to identify a few things:

Calling A Spade A Spade

* Premature: Occurring, growing, or existing prior to the customary, correct, or assigned time; uncommonly or unexpectedly early.  Born after a gestation period of less than the normal time.

* Jubilation: The act of rejoicing.  The state of being jubilant.  A celebration or other expression of joy.

Facebook’s desire to be first out-ranks the quest for quality.  This project is no exception.

Dorien and I ended our day’s efforts back on Skype itself, chatting live, with video, and agreed that we wasted a lot of our valuable time.  At least a couple of hours all together. 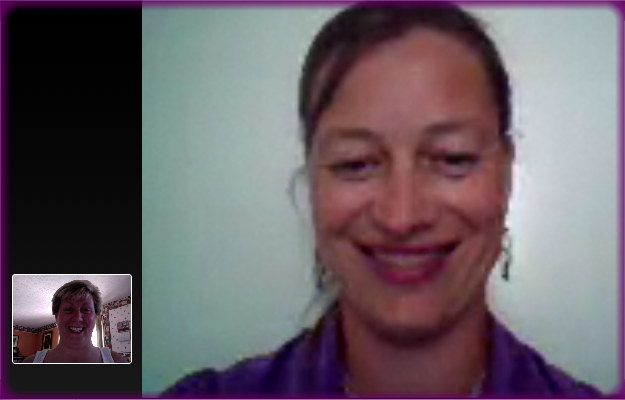 Dorien Morin-van Dam of More In Media & me via Skype

Who has time for that?

Honestly, I was annoyed.

Really, for the small business owner or entrepreneur, this does not seem to provide any wahoo-winning benefit.  I’d rather use Skype.

Mobile phone users seem to be the real winners with Facebook Video Calling.

Those interested in braving their way should begin here: https://www.facebook.com/videocalling

What Not To Call It

A Bit Of Irony

“…I’ve been playing a bit on Google + in the hangout feature.  This video chat feature is amazing…”

What were your findings?  Are you jubilant?

Think Google+ will give Facebook a run for their money?

Please tell me your thoughts below!  🙂