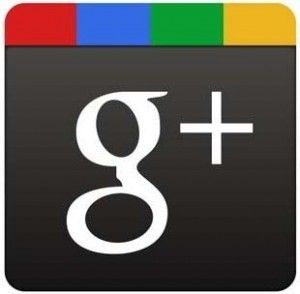 When the news of Google+ was released, like many of you, I was thinking…

Do I really need another social network?

Not to mention my blog and related social activities!

Battle Of The Social Networks

We were also hearing about scandalous battles between Facebook and Google — Which one might wipe out the other, and if other social networks could really survive along with the new, exciting Google+.

Google offered a tool to input your Facebook friends into their “circles” platform, but Facebook quickly blocked it.

Hmmmm….  All that excitement, really!?

While others were scrambling for invitations to the elite BETA platform, I tried too, but other things kept me from rushing there.

Where it took the others years, it took Google+ days to reach such a gargantuan number of users.

My Google+ profile looked a lot like my Facebook profile.  The Home feed was even quite similar, but instead of having a “like” button, Google+ offered me the +1 button.

I began checking in a bit more often, and started to like a few other features:

I circled others and they “circled” me.  (A good thing)

Above to the right, you can see an example of three of my circles and how they appear on the Circles dashboard.  In another area, you can view “mini Vcards” for all people in your circles.  It’s quite cool!

You can use as many circles as you like, and include people in several circles.

You can also re-name and re-arrange at will.  Start another circle and name it anything you like at any time!

Supposedly, Google+ users can have up to 5000 total in their circles, but it has been heard of that a few individuals have exceeded that limit.

The Long And Short Of It

It took some getting used to.  But if you can maneuver Facebook’s constant changes and unclear updates, then you can navigate Google+!

Here’s an updated image of my Google+ Profile: 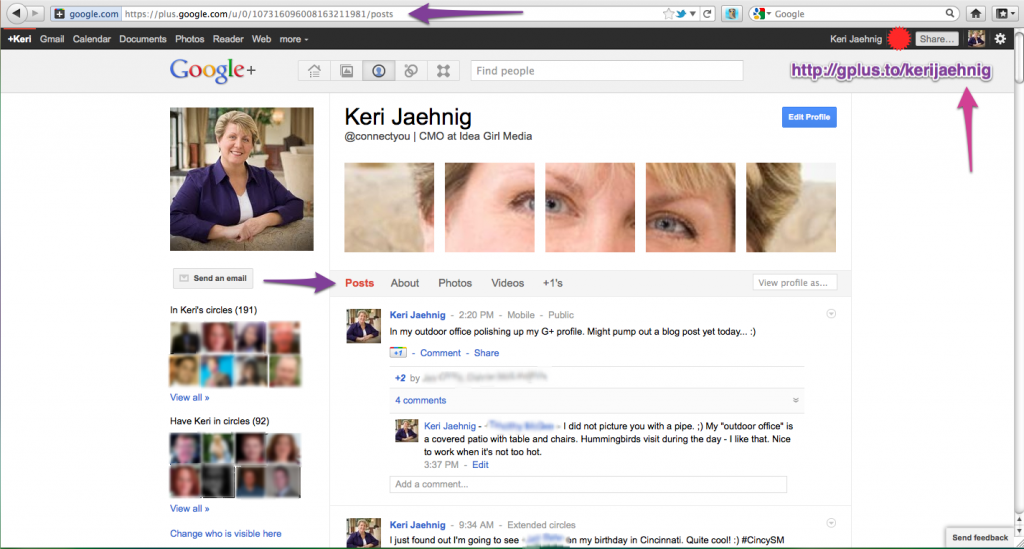 You’ll notice the web address (URL) for my Google+ profile is long, and includes a lot of numbers (noted with a purple arrow, above).

Many people find that hard to remember, so they get a shortened URL like the one typed in purple at the upper right of my profile.

Find out about shortening yours here.

Also notice that you can use the +1 button within comments, tag people by name, and choose what to view in the bar below the photo banner.

The photo banner can be made up of whatever image or images you choose!

It’s genius how other Google products and options are integrated into Google+!

From a follower, I received the question:

“Is it time for My Small Business to jump on Google +?”

The correct response seems to be:

Business accounts are still in development.  But Google is shifting that effort into high gear, and asks that we hold off on creating business profiles.

So, what are small business owners, entrepreneurs, and solopreneurs to do?

Find a friend that can get you an invite onto the newest social network, still in BETA.

You can now start a Hangout right from YouTube!

Google+: Yes, you do need another social network!

Post a comment below with how we can connect via email, and I’ll make sure you get one!

Are you on Google+?

What questions do you have?