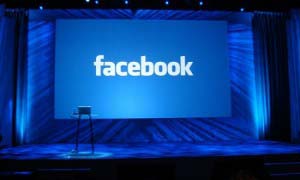 You may have seen some changes on your Facebook Playground…

Some are excited, others are angry that Facebook’s moving their cheese just as they get comfortable.

I’ve found most are just trying to keep up, and anxiously await the change.

Social networks like Google+ are even releasing new features to stay enticing as Facebook prepares to make announcements of their platform improvements at their f8 Conference later today.

So what’s everyone flipping out about?

The first change everyone experienced was the “subscribe” feature.  Previously, in order for people to see updates, a 2-way approval was required.  With the new subscribe feature, everyone magically becomes a publisher in the social environment (if they so choose).

This is another way to syndicate content and decide who sees what.  Or what you see from others.  Note: the “Subscribe” button at the upper right of profiles.

Taking a look at Facebook’s information pages, and knowing some of their previous struggles, this seems like a way to do some housekeeping on their end, but also nudge some folks onto Pages and creating additional marketing opportunities.  Lets wait and see.

For now, listen to the “big fight” between Robert Scoble and his wife — A great example of two real people – one very public, the other not so much.

Care to pipe in on why you like this feature?

The ability to group your contacts was available before.  Now, Facebook makes this more convenient and it helps you use the Subscribe feature to publish content to your profile.

See top news and most interesting stories as they pertain to you.  Same stuff, re-organized.  Better?

At the upper right of your Newsfeed (Facebook Home) is a groovy list of your friends most recent actions.

Hover over each for a nice pop-up square to see more details.  Like another layer.  Get Top Stories, Recent Stories, and the most personally relevant.

Here’s a video that gives some helpful visual for 3-5:

No, you don’t get a poke for your birthday.  Facebook just moved these features to just below the groovy new ticker on your Home/News page.

Me, not so happy the Birthdays are less accessible.  But pretty happy the silly Pokes is more hidden.

What do you think? 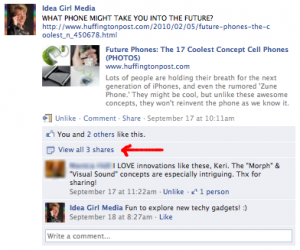 See who your top brand ambassadors are!

This one was earlier to the party.  Facebook Page Admins should be grabbing noise makers and confetti and doing back flips!

Have you ever wondered who was sharing your posts, and where the information was going?  Just click the “share” link as noted in the picture example.

Now you know who your brand ambassadors are!!  🙂

I’d say this pretty much confirms prediction of the death of Notes.

Shall we wager a bet?

Forbes featured the story about WSJ Social, “For a world where Facebook is the new Internet.”

They’re doing just what we all should be doing – Meeting our audience where they are!  It’s a simple interface that highlights top stories and allows you to invite your friends.

Facebook’s f8 Conference is today.  The Keynote begins at 1:00pm EST and can be viewed via Livestream.

There, we’re expected to hear announcements of changes that will redefine social media.

Some think it will involve music.  Some think we’ll see an entire re-design.  Others think it’s just a continuation of the war with Google+.

What do YOU think?

What are some of your predictions of what we’ll see in the new Facebook?