In early 2011, I asked the question, “Do Ohio Elected Officials Kick Social Media Butt?”  I extended an open invitation to all Ohio political candidates on the ballot for the November 2011 election – and again for the May Primary – to submit a guest post to help citizens become aware of their platform.  That original post inspired a series of informational posts.  This is the ninth in the series on how Ohio Political Candidates can ROCK Their Social Media.

For those finding this post first, here are the first eight ways:

So what’s the 9th way Ohio political candidates can ROCK their social media?

As a political candidate, you will attending and speaking at many events.  These occasions are perfect opportunities to tweet terrific tellings of what you’re up to.

Said another way: Twitter out some juicy details to your constituents.

There are a few ways to go about this:

Optimally, you’ll have a plan that includes all three.

A few things happen by tweeting out tidbits of information along your campaign trail:

Now, some political candidates don’t like questions.  But, logically, if people are asking questions, at least they have interest and want to know more about you.

This shows they want to engage in conversation with you.  Which should be your goal so your constituents will remember you and vote for you on election day.

Here’s an example – A collection of my tweets from yesterday evening’s Keynote presentation by Jeremiah Owyang at Social Media Success Summit 2011: 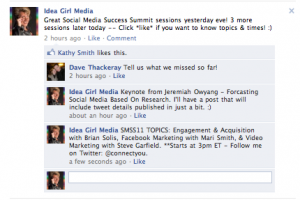 To increase engagement, I did a shout-out to my Facebook fans to let them know I would be tweeting insights from the event.

To the right, is an example of such a post and Facebook Fan interaction.  You’ll see I’m encouraging fans to hop on board for some exciting Social Media Success Summit sessions happening this evening.

That is the official “hashtag” for the Social Media Success Summit 2011 event.

A hashtag is an identifier — A way to easily find a topic on Twitter and interact with folks of similar interest.

If you click on the #smss11, you will be directed to all the real-time tweets for the event (they’ll be twittered out all month!).

To maximize the effects of  Twitter efforts, political candidates should create a #hashtag for themselves and use it throughout their campaign.

This encourages the following:

To ensure you choose a hashtag not already in use, you can search a Twitter hashtag directory.

1) Utilize Twitter to inform your constituents along your campaign trail.

2) Use a #hashtag to make your tweets more identifiable and increase your followers.

What did you think of the curated tweets on Storify above?

Tweet me, or tell me your curiosities in the box below! 🙂

Disclosure: I am an affiliate of the Social Media Success Summit 2011 event.