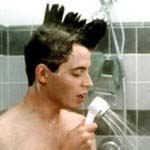 I jumped into the shower after a writing binge, and it suddenly occurred to me that there was no social media in my shower.  ……None!

What!?  This seemed hard to believe, since it seems marketers usually do not turn down an  opportunity for a captive audience.  Think about it.  A good majority of the population takes a shower daily.  Further, they are usually there for a fairly consistent amount of time with less interruption.

My average shower time is about 15 minutes.    In fact, I get some of my best ideas in the shower!! Going out on a limb, I’d say I’m not alone.  I know I’ve heard people talk about an idea they got while in the shower – have you?

Even Rachel from the popular TV show, “Friends,” admitted to Joey during one episode that she practices her clandestine Grammy Award acceptance speech for Best New Artist.  Reference the picture of Ferris Beuller – there he is singin’ away.  Might it be fair to conclude that a good amount of our friends are spending 10, 15, 20 minutes or longer….even on occasion??

Lets also consider that I remember reading somewhere that the average woman slathers on in the neighborhood of 10 beauty ointments in the process of “getting ready.”  So they’ve got us there.  It takes time to apply all that. So where are our brand’s social media strategists when we could be reasonably attentive?

When it comes to beauty products, I’m a brand shopper.  But I share a shower with another person, so I counted 3 big-brand named products on my shelf.  All brands with Facebook and Twitter accounts.

Check this out: One of the product names was even a question, “Do you need a margarita?”  Inwardly, my answer as I lathered the bath gel on my shower puff was, “YEAAAHHHH -AAAHHHH!”  So, they’ve done their job of making me think.  Why didn’t they take the step further and engage me with their social media?

If it’s a matter of placement, I suggest printing those ingredients in a slightly smaller print to make room for icons, questions, and occasionally an exciting contest or sweepstakes question to answer on their Facebook page.  Or an invitation to tweet with a #groovy hashtag regarding something I favor about their products.  I mean….isn’t it all about branding?  And, shouldn’t their social media icons be……………everywhere they are?

Where are the marketing experts?  Aren’t they taking showers to have considered this?  Or is the shower one ritual that is sacred…?

I think these large health and beauty product companies are missing the mark — under-utilizing social media.  No, I don’t think it would be appropriate for Aunt Betty to check in on Foursquare that she’s in the shower.  I don’t want to know that!  But I do think there is a whole population of people that would rinse, repeat, and be great brand ambassadors if they were properly engaged to do so.

So, if any of them are down a social media strategist/community manager, I have a little time and would love to talk!

To everyone else: Is your shower free of colorful icons too?  How would you feel if you found a blue “F” or a light blue “T” on your shampoo bottle?  Or is your shower…social media-sacred??

(Hey, a new question for Quora!)