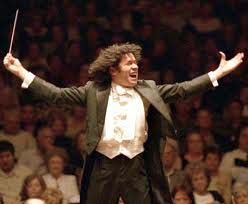 Is it your parents?  Your boy scout or girl scout advisor?  A friend?  Your Twitter peeps?  …Who Influences you??

I would name a small handful of people that made difference in the way I navigate life.

Facebook has been an amazing experience in re-connecting with high school classmates and college buds.  It has been quite fun, and I talk with some people more now than I did when we were actually in school!

So I log on a few days ago, and a few of my friends have posted a link to an article that brings up a picture of my childhood band teacher.  Wow!  So I click to see…

“Getting in Tune with Nancy Flanagan – Former Michigan Teacher of the Year blogs, lives near Traverse City.”

Sort of a “Where are they now?,” for people from my hometown community.  The author spoke of his musical memories and how Nancy influenced his experience right from trying out mouth pieces for 6th grade band.   He went on to explore how she fell into teaching as a “happy accident,” and in her career touched about 4,000 students at the middle and high school grades.

It is relevant to recall that during the time I was at Hartland Consolidated Schools, the education system was indeed  struggling for funding and space.

Further, the music programs were usually overlooked as decision-makers were more enthusiastic about sports.  So when Jon Morgan of Hartland Patch highlighted that Nancy built the music program there almost from scratch, and developed it with many challenges, this was no joke.

For my class and the those graduating a few years beforehand, there were some highs and there were some lows!  Attending Band Festivals was a fun field trip, but our school band was always the underdog when compared to schools with more resources.  While we worked hard and did our best, we would return from those large group events with less than optimal scores.

Kind of the other side of the coin…

I had the privilege of taking private flute lessons with Nancy.  She coached me to a good number of  “I” rated performances at Solo & Ensemble festivals.  And I hung out with a small group of kids that were passionate about music and where it could lead.  So from her we also learned to transpose music, consider unlikely small group ensembles, and to explore a composer’s work more seriously.

Back to Jon’s article, he referenced Nancy’s most memorable moment, “was in 1986 when her high school band class earned a “I” at band festival. It was the first win for Hartland in 20 years.”  My breath stopped for a moment when I read that!  I was a senior and part of that class!!  WOW!!! Suddenly recalling that experience, when the class heard of the score earned, there was a rumbling of applause we had not made together before, and I had never seen Mrs. Flanagan smile bigger!  For us students it was like finally getting to a destination after swimming upstream for a looong time.  I won’t give it a definition for her.  Now, as an adult very similar in age to where she was then, I can now grasp a bit better how amazingly fabulous that accomplishment must have felt for her…

How very cool to have been part of that moment!

This terrific lady went on to achieve well-deserved Teacher of the Year awards from Hartland and the State of Michigan.  She now empowers other teachers as an education consultant and blogs to share her thoughts and insights.

Today, I still play my flute with the Clinton County Community Band from time to time.  And for me, the concert tune that rings in my memory from high school is “Alla Barocco,” almost a weekly Friday request we couldn’t seem to get enough of!!

I learned one other thing from Nancy Flanagan – only slightly related to music:

That it’s okay to passionately yet intelligently stand your ground when you know you’re right. That isn’t always the most popular place to be, but I’ve learned that in the long run it’s the best place to be.  If she’s reading, this may be a surprise for her, so I’ll approach that more in detail in another, later post.

Since I’ve had some fairly recent contact with with Nancy via Facebook, it made me smile to know that in retirement she had moved to a desired destination.  She would hopefully be happy to know that I don’t think she looks old enough to retire!!  🙂

While a lot of my discussions lately are of influence – related to social media – I feel it is important and appropriate to  recognize and celebrate those that influence us offline.

Now it’s your turn.  Who has made profound influence in your life?  What learned gifts do you cherish?