Have you seen Glenn Beck in person?

Chatted with him for a moment?  Interacted with his crew?

Mainly a privilege.  An opportunity for my town.

Just before Christmas, Glenn Beck was to make his way to my city – Wilmington, Ohio – to celebrate “America’s First Christmas.”  Then, he was expecting to experience a version of Bedford Falls.  His intentions were to let our small town be an example to America.  And to promote his new book, “Broke.”  The big day: December 15, 2010.

When locals heard the news of Glenn’s coming, the enthusiasm was high.  People buzzed with excitement of another celebrity visit, and a core committee geared everyone up for increased tourism and commerce.

Buy Local First Clinton County made a plan for small businesses to band together to make their goods more widely available.  The Wilmington General Store website launched, and a new form of the Buy Local theme would evolve.

Behind the scenes, top elves naive to typical protocols of large-scale events made best-guess decisions, so every preparation was more difficult than it needed to be — ya know, the usual “before the big guy visits” stuff.

If you were a local business owner, elected official, or part of the host committee, chances are you were busy making toys or cookies and didn’t sleep very much.  But for good reason.

Over a handful of days, thousands of people made their way to Wilmington, Ohio.  A place once listed in our country’s top 100 small towns to live — more recently dubbed, “Ground Zero of Unemployment,” by the television show, 60 Minutes. Shops increased their inventories, hotels were full, and the streets were sprinkled with people taking it all in. 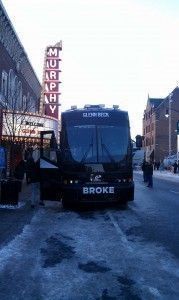 December 14, 2010 – “America’s First Chrismas Eve” – We were still shoveling heaps of snow and praying for a break from arctic temperatures.  Yet, people scurried to town – many hoping to eat pizza with Glenn at a private gathering.  I had the privilege of meeting Cory Emberson, California resident and co-author of Pursuing Liberty.  It was my pleasure to take her to Generations Pizza, and she was able to meet Glenn Beck personally.  My husband I were unable to stay…bummer. We hear it was a heck of a time!

December 15th…The big day.  Breakfast with Glenn Beck sold out.  Visitors filled the sidewalks – you couldn’t even see the pavement.  The book signing for Broke over-flowed Books ‘N’ More!  The picture above shows Glenn Beck signing my copies – gifts to my relatives who are also fans.

I spent the day in the basement of the book store greeting the public with other small business owners.  Glenn stopped down to greet us, and he was genuine…quite casual and friendly.  No swelled-head celebrity.

The radio show at the Murphy Theatre filled the house.  It was just after the doors closed that I was able to find a break in the masses of spectators to take the picture of Glenn’s bus (above) outside the theater.

Glenn Beck did indeed tape America’s First Christmas in Wilmington, Ohio at the Murphy Theatre.  I was fortunate enough to see it live with my daughter that evening.  A heartfelt evening.  Real sentiment.  An acceptable level of schmaltz.  I was impressed that Glenn Beck ventured out on stage dressed as Santa (The Big Guy), and let it all hang out by stripping to a manageable layer of clothing to finish the show.

Keeping record-levels of spectators engaged in a small town gets interesting.  My husband ran the outdoor entertainment throughout the day on the City stage, and local artists and groups were happy to perform!

A grand few moments, eh?  It took my husband two days to warm up!

That day, people from all over the country visited Wilmington, Ohio.  Known to me: California, Virginia, West Virginia, New York, Michigan, Indiana, Illinois, and other parts of Ohio.  That was a huge spark to our local economy, and brought needed attention and revenue to several local anchor businesses.  The Wilmington House of Prayer inspired many – including Glenn Beck.  Our community evolved into a destination!

Did this benefit all of our local businesses?  No – the logistics just were not developed.

Did the Wilmington General Store offer optimal results for both merchants and consumers?  No. While some sales were reported, servers could not handle the initial volume, which discouraged continued growth.   Website administrators limited the number of possible hits, as told to me by the President of the company contracted to operate the site.  To date, all I’ve received from it are spam emails.

This article is a follow-up to a previous article – posted before Glenn arrived in Wilmington, Ohio.  Then, I was hopeful for my town, my family, my business.  I sincerely believed: we’re not broke.  We still got it!

Since Glenn Beck’s visit in December, his producers have reached out to our community to see how we are doing.  By phone, and email.  They genuinely want to know.  Further, we’re hearing word that the sleigh may return.  In warmer weather…we hope.

About a business quarter since America’s First Christmas – Here is what one might observe these days:

It is still my opinion that Wilmington is not broke.  We still got it.  But it might have taken a visit from Glenn Beck for some people to realize it.

Did you make the trek to Wilmington, Ohio in December?

Tell me your experiences, or ask your questions below!