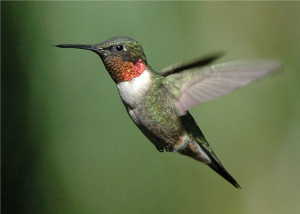 Are you a hummingbird watcher?

Last Spring I started inviting hummingbirds into my yard by putting up a feeder.  Then two.

I enjoyed their visits, and was enchanted by their beauty.

The group that hung out with me last summer was largely female, and would chirp back to me if I spoke or sung to them.  They were a happy part of my days.

Even if they would battle each other.

My family nicknamed the back yard, “Battleyard Gallactica.”

I did not expect the hummingbirds would be so territorial with the feeder!  Hummingbirds just don’t share.

It had to have been the result of a feeder battle that we found a dead hummingbird on the patio one morning last summer.

The rest of the season was mainly peaceful, and I enjoyed them enough to be sad when they migrated.

…So, I made sure we hung feeders up again this Spring!

It was a bit late into the season when I wondered if they would arrive, but the hummingbirds did finally make their appearance.

This year’s group is mainly male, and they are not as talkative or cheerful as last year’s flock.  Their wings are also louder and more “musical.”  A bit skiddish, as they don’t like it when I look at them — let alone try for a picture.

The West Side Story Of It All

The birdy dynamics this year are dicey!

I’ve watched two and even three hummingbirds go after each other with such vigor!  There is a definite angry tweet, and their movements are very similar to boxers in a ring.

The whole event is sort of like they are representatives of the Jets or the Sharks asking probing each other with, “You wanna rumble?  C’mon, I dare ya!”

Before now, I hadn’t worried too much about other birds as my neighbors were all with large feeders of other types.  But this year a neighbor gave us a beautiful hand-carved feeder that invites many bird species, and it hangs across the yard in a pear tree.

On any given day, our fence is lined with robins, finches, cardinals, blue jays, sparrows, and morning doves.  They fly in and out, feed as they wish, chirp to each other — It’s like a big, happy, feathery party!

What have I learned?

It’s pretty quiet around the hummingbird feeders.  Either one bird at a time, or bickering and fighting.

Interesting, but you don’t feel like a party, do you?

The bird feeder in the pear tree sees TONS of action!  There is sharing and caring, and there’s always something going on!!

The birds on the other side of Battleyard Gallactica are cool to share, and it doesn’t seem to be a problem that robins might see finch or a sparrow or a cardinal or whatever feather.

All the birdy species are dancing around – very similar to:

Now c’mon – You were dancing in your chair, weren’t ya?

Maybe even played the video twice…??  😀

What Hummingbirds Can Teach Us About Social Media

But open sharing and no worrying over who gets what or how much: Seems to be happy and encourage social sharing.

Which is the whole point of social media, right?

Now it is your turn!

Will you be a hummingbird, or a penguin??