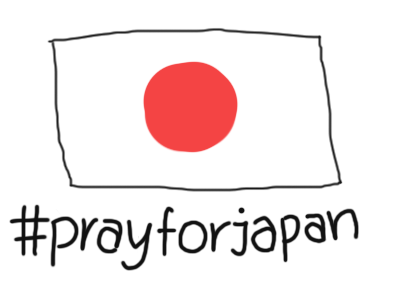 This horrific disaster has certainly dominated the news for the past few days!

Even now, the earthquake and tsunami in Japan are 4 of the top 10 current Google search trends.

Since March 11th, social networks have allowed people of Japan to communicate with each other, and with other parts of the world.

Phone networks were down according to all news media reports.  Yet people were able to communicate social media…

Person-finder App via Google – Helping find and connect people after the disaster.

Within the first day 16,000 videos had been uploaded to YouTube about the earthquake and Tsunami in Japan, according to ABC News. 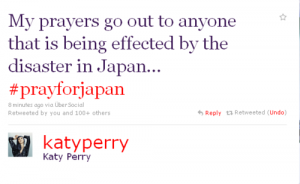 Very quickly the Twitter stream was flooded with tweets including news, pictures, prayers, and rallies to help.  The hashtag #prayforjapan was quickly adopted.

As you can see, celebrities were a big part of the conversation.  Calls for donation are consistent, and many dollars of contribution have been stimulated through Twitter.

Even now, #prayforjapan is the top trending topic on the Twitter social network.

Death tolls and predictions continue to change.  Just this morning, the Japanese Prime Minister officially announced that this is Japan’s toughest crises since World War II.

The news networks know how powerful social media can be!  As I was searching for a video with a more local point of view, I found it hard to find a quality view that was not dominated by an international news network.

Here are some eye witness waves after the tsunami:

Reach Into Your Pocket

The Red Cross urges you to energize your inner social media-ite and give:

They make it easy!

Text REDCROSS to 90999 via your mobile phone.

Is someone close to you directly affected by the Earthquake in Japan?

Have you engaged in social media to learn news or connect people?

Please tell me below…