It’s almost ten years since the attack on the World Trade Center in New York City on September 11, 2001.  As Clinton and Highland Counties in Ohio gather to honor their local heroes, it is quite fitting that the American Red Cross chapter chose Michael Hingson as the annual Heroes Awards Breakfast guest speaker.

What is the Heroes Awards Breakfast?

Locally, it is the largest single non-profit event each year.  Nominees from our local area are honored for heroic deeds that make a profound difference to local citizens.

Usually, between 350 and 400 people pay $20.00 each to enjoy a fabulous morning meal, listen to a guest speaker, support their local chapter of the American Red Cross, and celebrate worthy winners in the following categories:

On March 30, 2011, leaders and local citizens got up extra-early for the fifth annual Clinton and Highland Counties Heroes Awards Breakfast held at the Roberts Centre in Wilmington, Ohio.  They heard from guest speaker, Michael Hingson.

Who is Michael Hingson?

Michael Hingson is the founder of Hingson Group, Inc., located in the San Francisco Bay Area.  He teaches organizations how to move from a corporate culture of “diversity” to “inclusion,” focusing on strengths rather than differences.  Before forming Hingson Group, Michael was the National Public Affairs Director for Guide Dogs for the Blind.  Prior to that, he worked for nearly 30 years in senior sales and management for innovative, high tech companies.

The Innovative Speakers Network recently named Michael Hingson one of the Top 10 educational speakers in the United States.  Even without mention of all his credentials, Michael comes highly qualified to address a group of eager heroes! 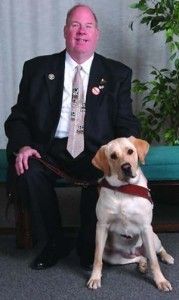 Why Michael Hingson At This Red Cross Heroes Awards Breakfast?

On the morning of September 11, 2001, Michael was giving a PowerPoint presentation to a group of professionals, when the office building tipped dramatically to one direction.  Michael and his guide dog, Roselle, were working on the 78th floor in Tower 1 of the World Trade Center in New York City.

We all know of the details of 9/11 and the terrorist attacks.  The destruction of World Trade Center, the tragic loss of life, and how everything changed for a major city — and the world — on that September day almost ten years ago.

You might not be aware that Michael Hingson and his guide dog, Roselle, utilized amazing trust and teamwork to lead others out of Tower 1.  They were perfect examples of heroism!

But there were intense moments for them too.  Michael described, with painted detail, his preparatory good-byes, panicked actions of others in his group, the phases of their descent down the flights of stairs, and how uniquely he and Roselle made it out of Tower 1 just moments before it collapsed.

That day, The World Trade Center – the area eventually known as “Ground Zero,” – quickly became an area of tremendous American Red Cross heroic activity.  So Michael Hingson was an example consumer, if you will, of the valuable services offered by the Red Cross.

Michael and his current guide dog, Africa, came to speak to heroes and friends of Clinton County and Highland County in Ohio.  An area dubbed by 60 Minutes as “The Ground Zero Of Unemployment,“ not long ago.

It’s been a tough road for these Ohio communities.  But people like this year’s Heroes Nominees have worked hard at pulling us up over the rubble to a brighter future.  We’ve turned a few good corners – there is light at the end of the tunnel.

Michael Hingson came at the perfect time to remind us that there is triumph in trust, and that sometimes the key to survival is not what’s in plain sight, but in working together.

I am member of the Clinton/Highland County Red Cross Leadership Council and have served on the local DAT Team.  This year it was not possible for me to help quite as much with the Breakfast event.

However, before walking out the door for bacon and eggs on March 30, 2011, I did grab my Flip Video!  My goal was to give my readers a view of how full the room was, and a true impression of the Heroes Awards Breakfast.

Note that I was not able to get very close to the speakers’ podium, as it would have interrupted the flow of the event.  Take a look:

Both Clinton and Highland counties have a Disaster Assistance Team (DAT) in place to help those in need at times of crisis.

All disaster services are free to those in need.

Contrary to what you might believe, The American Red Cross is NOT a government supported agency.  The Red Cross receives some support from The United Way, but relies heavily on contributions from community members and local businesses.

Be A Local Hero

The Heroes Awards Breakfast kicks off the annual Heroes Giving Campaign.  Community members and stakeholders are encouraged to donate what they can to support the local Red Cross efforts — whether that be a gift of time or a monetary contribution.

The Wilmington News Journal has been a gracious and active Local Red Cross Hero!  You can read their, “Heroes Among Us,” by John Cropper, describing the recent Heroes Awards Breakfast, and view a good video clip of Michael’s dynamic words.

Those also interested in being a Red Cross Hero can call 937-382-0083 or email the Community Coordinator at robbinsk@cincinnatiredcross.org.

The Clinton/Highland County Chapter of the American Red Cross is a branch of the Cincinnati Region headquarters.

How Does The American Red Cross Honor Local Heroes?

We hold them up as examples.

Michael Hingson is an excellent speaker, a true professional, and he sets the example!

Have you benefitted from American Red Cross Services?

Will you be a hero?

Maybe our Community Coordinator, Volunteers, those honored, and those nominated, will add their insights below…

** Michael Hingson’s soon-to-be-released book, “Thunder Dog, A Blind Man, His Guide Dog, and the Triumph of Trust at Ground Zero,” can be pre-ordered here.